Write a Review
What did you think of the race? Share your thoughts! Write a Review
Kathy recommends this race
2015
"One should not be foreced to climb stairs after a 1/2" 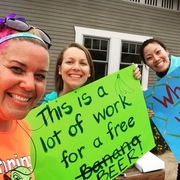 I love the RnR series and this race did not disappoint. This was my first destination RnR race - I don't count DC since I used to live there.

I chose the Hard Rock Hotel since it was close to the expo and the finish line for the 1/2 (walking distance for both). The expo was well organized as usual and there were plenty of vendors. I stocked up on socks, gel, and inserts. I always get a long sleeve zip up RnR shirt from every location - the ones for San Diego were orange with an embroidered surfboard. LOVE!

The start line was quite a distance from my hotel and I had to take a cab. I can only imagine if you were a local or not staying in the downtown area that getting to the start would have been quite a hassle. Side note - for the 5K you could drive and then walk about 2 miles to the start and then back to your car. The start at this race seemed to be a bit disorganized and I felt like we waited a really long time for the race to start. I think I took off an hour after the race was supposed to begin. I'm not sure what the hold up was but I was happy that I had an extended check out at the hotel or I never would have made it in time.

The course was really nice and the weather was perfect. We saw a lot of different areas of San Diego - Balboa Park, neighborhoods, downtown, etc... This is definitely a hilly race. As a person who always studies the course for every race - I'm not sure how I missed this. What made it worse was it seemed like every two miles along with a mile maker was a steep hill. there was also a one mile downhill around mile 11. This race really did a number on my legs. The only real negative I have is that part of the course through the neighborhoods had some really rough roads. I'm always tentative about my footing and this slowed me down for sure. I know this was more a city issue than the race but I thought it was dangerous in some places. There were also a couple switchbacks with I loathe.

The water/Gatorade stops were fully stocked and volunteers were on the ball. There was also a fair amount of locals course support throughout the race - especially in the neighborhoods.

The chute seemed cramped but everything was stocked and fresh when I came through.

This 1/2 Marathon medal is one of the best I have ever gotten after a race and definitely the best of the RnR races I have done.

The after party was in PetCo Park - which is the baseball field just one block away. Directions to the park and the entrance were horrible - there were lots of us on the street that couldn't figure out how to get into the stadium. Here's may major gripe with the race - THERE WERE STAIRS to get to the after party. UGH! Yes, there was an escalator if you walked even further but as I had walked around nearly the entire stadium to get in I just took the stairs. However to get out of the party you had to take the stairs there was no other way that I could see.

Also, a constant problem at the RnR races is the Remix Medal. Why is it so far away from everything? I had to walk through the entire after party to get my medal. Come on - why cant it be at the end of the chute like at every other challenge race? Id like to get my medal and then get my pic taken by a photographer right after the race not after walking a mile to get the Remix Medal.

San Diego is beautiful - if you get a chance this is a race not to be missed.

Oh and I saw Meb!