Write a Review
What did you think of the race? Share your thoughts! Write a Review
2018
"Fun Race Experience- 2018 not the best year though. " 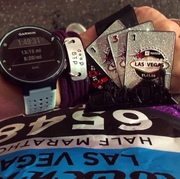 This was my 2nd time running the Rock n Roll Las Vegas Half Marathon (3rd year in a row participating in the event). I look forward to this race every year- I always love the entertainment on the course, the ‘wow’ factor of the lights on the strip at night, waiting all day to race, and the typically very organized fashion of the race.

The race expo is always huge, so we do that 2 days before the race (there’s a lot of walking involved). There’s never too many lines to pick up your bib or race shirt (which is nice), but this year I felt like the Brooks official merchandise was a little over-priced and basically all the same things that they have every year. I ended up getting the Brooks limited edition Rock n Roll Launch 5s (one of my favorite Brooks sneakers to run in) and have gotten so many compliments on them, but didn’t really see anything else that caught my eye.

The remainder of the expo is a lot of walking, sometimes free samples (yay!), and generic things that maybe you want to pick-up (I got a new Sweaty Bands headband- they’re my favorite).

IMG_1152.JPG
I still had my chest cold the day of the race, so I was expecting to just play the race with how I felt. I was in PR condition, however if I wasn’t feeling good then I would abandon my original goals and just have fun.

The race started in a different area this year and that definitely caused A LOT of confusion. The starting corrals were a complete mess and I walked back and forth along the start line corral TWO TIMES (with other confused runners as well), before I found an opening in a gate to get into the gated area and walk to my corral. This was so disorganized and runners were hopping over the large gated fence just to get to their starting corral minutes before the race started. Then once in the corral, runners who were assigned corral 5 were continuing to walk up to corral 2,3,4- this was really frustrating for me because if I wanted to PR, I didn’t want to be clogged with runners who were now “self placing” themselves in a faster-than-they-shold-be corral. I ended up moving up to corral 4 instead of 5 because of this and that was a really great decision. There were still walkers in my new corral, but what can you do. This part of the race really disappointed me. I hope they can fix this in the future (Disney does a GREAT job with this and hoping they can emulate that in future years).

The race iteself- I felt GREAT for the first 8 miles. I held back the first two until you come around the “welcome to las vegas'' sign and then started to kick into my goal half pace miles. The energy and spectators along the course are amazing. You also pass by the start line (on the other side of the road), which is kind of fun to see other runners just getting ready to start their journey!

After mile 8, my congestion got worse and my nose was completely plugged. This made it so difficult to drink my Tailwind and take down gels (I took one at mile 4.5 & the next one at mile 9). Around this point, I started to slow to around an 8:20 mile and just decided that it probably wasn’t my day and took in the energy along the course. Miles 8-10 you pass through fremont street and the crowds there are always so energetic (they really make you feel like you’re an elite)!

I crossed the finish line within a minute of my current half PR and while it wasn’t a PR that I was hoping, I’m still proud of my effort and happy I was able to adjust my goals during the race.

Overall, this may be our last Rock n Roll Las Vegas- the lack of variety at the expo, complete disorganization at the starting corrals, and overall communication along the course wasn’t where it should be for a $100+ half marathon entry fee. I think it’s time to try something new for next Fall, but I still think this is SUCH a fun event and everyone should experience it at least once!