Write a Review
What did you think of the race? Share your thoughts! Write a Review
Tim Murphy recommends this race
2018
"Hang on tight!" 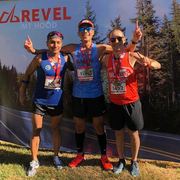 Holy cow - 5,000 feet of loss! If you're looking for a fast race, they don't get much faster than just bombing down a volcano for 26.2 miles!
This race was tough to review because there was a lot of really well-done aspects but also some fairly significant misses. But that means there's a lot to talk about so let's dive in.

The Good:
Race Comms - This race was a bit complicated because it's a point-to-point race that starts on top of a volcano (correct, that's pretty badass). But because of that, we had to start early. Very early. I'm talking a 2am alarm time, drive to Sandy High School to be on the bus by 3:30, hour long bus, then wait at the start to stretch/warm up/relax for an hour before gun time at 5:30. Personally, I liked having that much time to chill and eat/use the bathroom before the start. With all those complicating factors, the race management did an expert job with communication beforehand. It would have been so easy for me to screw up the start, but the race comms were so good you couldn't help but know what was going on.

Starting area - Relaxing, calm, laid-back and BEAUTIFUL. Again, top of a snow-covered volcano (we were just below the snow line), basically a full moon and temps in the 50s. So pleasant. Also plenty of porto-potties, so that's always a plus. And we got to drop our bags right before the race started, so it was really have everything we needed to wait and be comfortable.

Scenery the first 5 miles - Absolutely incredible. Clear morning, sun coming up but we're still getting a ton of light from the super bright moon and you're just descending into the Mt. Hood National Forest area. One of the prettiest race starts I've ever seen.

T-Shirt and Medals - Really nice! Like my shirt a lot - nice cotton/poly blend, fits well, good looking - and the medals were great! They also added little charms to adorn age group winners, of which I was not one, but I did get to admire other people's charms!

The Not-so-Good:
I really had two significant criticisms - most of the course scenery and the aid stations.
Basically you run on Hwy 26 for ab out 20 miles of the race. This is a heavily-trafficked road, and we were basically buzzed by semis and other trucks the whole time because you just run on the shoulder. I don't think there's anything the race can do to fix this, and I think people who are running this insane downhill course are doing it to PR and/or BQ, so they might just view the Hwy 26 route as an acceptable downside to logging their fastest time. I didn't like it, but to each their own.

The aid stations were just a mess - no way around that. Biggest thing was a lack of uniformity with what was in what cup or where water and powerade were positioned. At every aid station, water and powerade were just randomly scattered around, so you could never tell what was where. Often times the last thing a runner could grab was powerade, which is a cardinal sin of aid station set ups (you don't want the runner to have to taste powerade for 3-5 miles until the next aid station - always gotta have water last in line to be grabbed). And the last aid station was just not handing stuff out at all (I heard this from the Half Marathon runners too). I don't fault the volunteers - they're always trying their best, but it was pretty clear that they didn't get effective direction in how to set up water/gatorate, where, and why.

The post-race area was OK - there was only a trough of coke products with water/powerade isolated in the finisher area, so getting water while we hung out post race wasn't really an option. When we tried to leave, we had to wait in line for about 30 minutes while the busses ferried people back to Sandy High School where the cars were parked. They were walking through with Papa John's pizza and giving that out to runners as we waited (which was VERY appreciated!), but it was a bit of a bummer to have to sit there for 30 minutes before getting on a 15 minute bus ride back to the cars.

In the end - if you're in the PNW and looking to BQ or PR, you should absolutely consider this race. There are a lot of hoops to jump through, and it's not a great course overall. Bu23t the first 5 miles are just beautiful, and if you're just trying to put your head down and PR, you probably don't care about the scenery either way. If you're looking to do a casual marathon, this one's a bit maintenance with all the transport issues. Also it should be noted that this was the first time they put on this race, and so for an inaugural event they really did a fine job.