Write a Review
What did you think of the race? Share your thoughts! Write a Review
Jessica Rudd recommends this race
2017
"Hills and happiness in beautiful Atlanta neighborhoods" 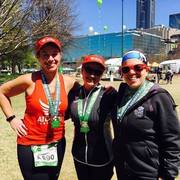 I've run the Publix Georgia Half Marathon and handful of times but this was my second time running the full distance. The race was definitely different from my first time running it; I was pacing the 5:15 group this time around and in 2014 my husband proposed to me at mile 22 so I seemed to forget how difficult the course was until this year. Atlanta Track Club took over the race management last year and I think they're set to build a world class destination event for the South. It was way long overdue for Atlanta to have a marathon to be proud of; we've reached the era of Atlanta marathons with greatness promised in the future.
The course itself is definitely a challenge so be prepared for some major hill training. If you're a first timer, think hard about this as your choice of race, but know we had several first timers in our training program and they all made it through Publix with plans to run more marathons. Surely that's a good sign. The new Ultimate Peach incentive sweetens the deal (Peachtree Road Race, Atlanta 10 miler, Atlanta Thanksgiving Half, Publix Marathon). Ultimate Peach finishers get extra awesome swag, this year including an engraved watch, plus a private tent with food, mimosas, and massages. It's a great motivator to have goals year round.
Final Verdict: While difficult, nonetheless, the swag, course layout, and beautiful neighborhoods, make this a worthwhile adventure.

Pros:
- Expo --> There's vast disagreement here, but I LOVED the intimate expo experience. In my mind, most race expos are monstrosities with the same stuff that I can easily buy on discount through Amazon without dealing with the anxiety inducing crowd. None of that BS at Publix this year. Expo was set up in a small circular fashion with a quick in-and-out bib pickup situation, easy crowd movement around the circle, and just a booths, including Atlanta Track Club gear store, Publix race gear store, Tesla, a rowing studio, some fun snacks, a Publix booth with extra swag, and a handful of others. Definitely saved time, stress, and money but there were many people (about 50/50 among my FB friends) who were disappointed because they wanted a big expo. I give full points for this expo experiences; others may give few points for the same reason. Just know what you're expecting.
- Race start --> Centennial Olympic Park is nicely appointment, easily accessible via MARTA with many parking deck options as well around the area. The start area is spread out in a way that allows easy navigation, bag check, access to both public toilets and port-o-johns. There's also a Starbucks right near the start line that's open and allows athletes to hang out; especially nice during poor weather.
- Corrals --> Easy access; your assigned corral is on your bib but I didn't see much policing of that. They may have been more strict in the front corrals. There's a generally policy against CamelBaks now ( something that most major races are implementing and being dictated by FBI/police policies) but there were still a few seen on the course since, again, I didn't see a good way of policing for those. Just be aware that it's against the rules so bring at your own risk.
- Course --> HOLY HILLS BATMAN! If you've not run in Atlanta, know that it's mantra is "heat, hills, and humidity." While the race this year only included the hills (we had beautiful weather) there is no point on the course where you get a break (except downhills of course). I'm giving it 4/5 difficulty because I've run a fair amount of trail races with much more elevation. Also, I'm running Mad Marathon in VT in July and I think those hills may end up worse so I'm leaving room here for "improvement." ;-)
- Aid stations --> Every 2 miles, almost like clockwork. Well appointed and included several different food options spread throughout the course, including sport beans, gels, cookies, oranges (OMG the best!). The volunteers seemed well trained in terms of handing out drinks in a way that was helpful and not obstructive. For a race with not great crowd support (Atlanta residents need to get with it), the aid stations were fun zones that broke up the course nicely.
- Course scenery --> I'm a huge fan of Atl neighborhoods. The houses are beautiful and each neighborhood has it's own flavor. One star off for the shit miles from 22ish on (after Piedmont Park) that are boring/awful IMO running through GA Tech and then the last mile slightly uphill to the finish on industrial Marietta. Blah.
- Mile markers --> Many people probably won't care about this (the course as a whole was marked accurately) but as a pace team leader the true course mile markers are important for maintaining correct pacing (Garmin pace/distance is always slightly off). Unfortunately, mile markers 23-25 were missing creating a situation where I was convinced I was behind pace. By time the next mile marker popped up at 25 I realized that I was 2 minutes ahead of pace. Frustrating to say the least. Considering I'm friendly with much of the Atlanta Track Club staff (and other pacers noticed the same problem) I'm confident this won't be an issue next year. *I hit the finish at exactly 5:15:00 anyway. :-)
- Post Race --> Due to a computer issue with matching race registrations to Ultimate Peach qualifiers, ATC discovered during the expo that they had underestimated by about 50 runners. Several friends of the ATC including myself were asked if we'd be ok accepting our Ultimate Peach swag a couple weeks late so they could order extras. I have no problem with this and feel that the ATC dealt with the situation as best as possible. As a data scientist I'm aware how difficult these data systems can be and I'm not surprised by the issue. Outside of that situation, the finish area is well-appointed with everyone receiving a box of snacks, variety of drinks (including chocolate milk - chug chug), medal, heat sheet, etc. Centennial Park provides a great finish area as well, especially on a nice day, due to to the open grassy areas great for relaxing/picnicking after the race.