Write a Review
What did you think of the race? Share your thoughts! Write a Review
Dave recommends this race
2015
"New Distance and Duration PRs" 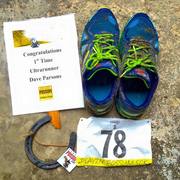 So several months ago, my running partner, Cindy, asked me if I would help her knock something off her bucket list by running the Playin' Possum 50K with her. I enthusiastically said yes because that's what you do when your running partner asks you to do something. We knew that the race was less than a month after the Boston Marathon, but we figured what's another 5 miles. Well, another five miles on trails with mud is a totally different experience than road racing. Fortunately, we had done a couple of practice trail runs including a 20-miler on the course so we knew before race day exactly how tough this was going to be after our initial misconceptions.

We set out and were very consistent and stuck to our plan both pace-wise and fueling-wise. After some initial congestion early on, the 100-plus runners who made this the second largest 50K in Ohio started to spread out and we found ourselves running pretty much by ourselves like a typical Saturday morning training run. The first section out and back had some mud but it wasn't too bad on the first pass. Then, we crossed over to the other side and had the creek crossing. I just jumped right in because it was hard for me to keep my balance going down the hill and I think it scared Cindy 'cause I think she thought it was an accident. I'm hoping there's a good picture of it since there was a photographer in the creek. :)

From there, we proceeded on to the dam wall and ran that monotoneous section that was out in the open. We were able to pick up our speed a little and started to pass some folks who had started more ambitiously and were paying the price. We did a great job on this section and then headed back to cross the creek and do the first loop a second time.

The creek crossing and that area was pretty tough as it had gotten muddier with all the people trekking through, but we made it. Then, the sky opened up and dropped a deluge of rain on us as we continued to run. By now, we're used to running in bad conditions so we just held steady. Unfortunately, though, it made the trail extremely muddy the rest of the way which really slowed our progress as a sub-6:00 finish began to fade away.

The worst part of this last loop was the out-and-back 1.5-mile trail past the aid station as it seemed to take forever and was extremely muddy and treacherous. Then, at the turnaround, we had to tear a page out of a book and carry it back to the aid station to prove we had been there. I'm just glad we saw the note to do it.

Over the final 3 miles, Cindy never let up and we finished strong as she was the 12th female overall and 2nd in her age group with a great first ultra finish. It was a true privilege to accompany her on this journey. I'll be honest...after Boston and being hurt, I was really afraid that I wasn't going to be able to do this. But, thankfully, I pulled it off today and am so proud of both of our efforts. This was five miles farther than I had ever run before nearly 2.5 hours longer than any run I had ever done.

When it comes to this event, you can't find a better group to do your first ultra. The race directors are awesome and very personable. They had laminated signs approaching the finish for each first-time finisher and they made sure that everyone had a great time. There was also a cool shirt, bandana, and sweet coffee mug! I highly recommend this event!!!