Write a Review
What did you think of the race? Share your thoughts! Write a Review
Shannon Chenoweth recommends this race
2018
"My Hometown Race" 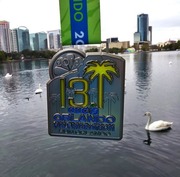 The OUC Orlando Half Marathon is my hometown half. It's THE half marathon to run if you live in the Orlando area. And, if you are able to visit this time of year, you should run it!

The race is put on by Track Shack, which always does an amazing job on their race events. The OUC Orlando Half Marathon is in it's 42nd year and draws 5,000 runners each year to run it.

In 2018, the race course was changed from previous years, removing about a mile of brick roads. The course contained approximately 1.6 miles of brick all in the first 5 miles. As someone who has run OUC four other years, this was definitely a plus!

The race takes you through five downtown neighborhoods, and has live entertainment throughout. Support is scattered at about every 1 1/2 miles, with nine stops total. The volunteers manning the stops are awesome, some even dress up with themed costumes.

The weather on race day this year was pretty good, we had temps in the low to mid 60s which was great considering this one can vary. You just never know in Florida this time of the year!

The medal, as usual was awesome this year. I love how it's always so well themed to Orlando and Lake Eola which is so prominent.

Post-race, there's great live music, beer and massages! You can also get some awesome photos with Lake Eola as the backdrop, as well as the beautiful swans. If you are a Central Florida local, you owe it to yourself to run this race!

You can check out my personal race recap on my blog:
http://girlsgotsole.com/blog/race-recap-2018-ouc-orlando-half-marathon/