Write a Review
What did you think of the race? Share your thoughts! Write a Review
Frank Nardomarino recommends this race
2016
"North Shore Classic Half Marathon" 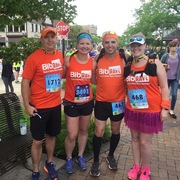 The North Shore Classic half marathon run by Ram Racing has been a popular race along the northern Chicago suburbs for many years. I’ve run this race for a few years and it’s probably my favorite half marathon. Besides being wildly popular by the local businesses and runners, the course is just beautiful running through the beautiful suburb of Highland Park. If you haven’t run this race before, you definitely need to add it to your list of must-dos.

Training -
I promised myself that I would train properly and shoot for that PR in my hometown race. Even though I’ve run this race for a few years and know the course layout and what to expect, I still wanted to do my best and take every training opportunity seriously. I knew that the Park Avenue hill would be brutal so I ran hills to gain some speed and strength on every hill I could find. My best previous half marathon time was a 2:04 and I really wanted to break that 2 hour wall. My strength and endurance was definitely where I wanted it to be but my race day mistakes got the best of me. I neglected to eat any breakfast and should have known better that the body needs the calories and energy to sustain distance runs. I also only carried a couple of GUs and took in only one of them. And I wondered why I hit that “wall” around mile 10 for this race…

Packet Pickup:
Ram Racing has always done a great job for race packet pickups throughout the Fleet Feet stores in Chicago and Deerfield. I obviously chose Deerfield since it was closer to me. Being super OCD, I’ve always been early to the pickup and while I was 45 minutes early, they were up and ready to go! The staff is always friendly and fast at what they do. This years shirt was pretty darn cool and colorful and I heard a ton of people saying the same. There were also some ads in the bag for future races.

Pre-race:
I woke up for the race around 5:30am and headed in anticipating that I would hydrate and meet some fellow BibRavePros before the race began. It was a pleasure to meet up with Heather (We met at the 2014 Chicago Marathon), Lisa, and Mark. What a great bunch of enthusiastic BibRavers! We met around 6:30ish near the start line to chat and take some pre-race photos. I love hearing what the other runner’s goals are and live vicariously through them. As for the whole pre-race ambience, it just cannot be beat seeing all of the excited faces and outfits that some of the racers brought. The weather was about 65 degrees and overcast at that time with a bit of humidity in the air. I don’t mind running in that weather but you’ll read more about that later. The corrals are well organized and having pacers in this race was a huge help to people. They were so motivating and friendly! Everything began with the Star Spangled Banner and you’re off!

Race Course:
Being from and working in this town still makes me appreciate the beauty that the north shore of Chicago exudes. As I’ve said before, I have run this race a few times and still look forward to running through parts with breathtaking views. The first few miles run through downtown Highland Park heading south towards Ravinia and the small town feel. It tends to get quiet through this part as you head towards Lake Cook Road and always challenges the mind in the beginning of a half marathon. Once you head north for miles 3-7, you run through some beautiful neighborhoods and some very supportive residents with signs and highfives. Then, you hit that infamous Park Avenue hill! Going down is no problem as I like descents but that hill going up just takes its toll on the quads. Once you survive that obstacle, the course runs north towards Fort Sheridan and all of the historic buildings. This is where the crowds seemed bigger and got you more excited for the rest of the course. You pass by a few views of Lake Michigan and then hit the Leonardwood North and South loop through the old parade grounds and some scenic views. Then you head back south towards the last couple of miles and that spectacular finish line. I always seem to find the last bit of energy I can muster on that last mile along St John’s Avenue with the huge supportive crowds. I can’t say enough about the extremely supportive and active volunteer along the course route at the aid stations. They were so excited and all gave some sort of encouragement by saying “Great job!” or “Push yourself!”

Post-race:
I’ve said it before and I’ll say it again…the sight of the finish line gets me every time. The North Shore Classic and Ram Racing gets it right. The intersection of St. John’s and Elm Place is about as nice as it gets for a smaller race. The crowds gather on each side with their inspirational signs and loud cheers. Ram Racing also announces the finishers by name and city as they cross the line and I’m sure it’s not an easy job! Once you cross, you are greeted by the volunteers with your medal and an awesome cold towel. You’re then greeted by the volunteers handing out water and finally you are greeted by the volunteers handing out the goodie bags. You get the usual assortment of chocolate milk (perfect!), banana, pretzels, and bagel.

Ram Racing and Fleet Feet have partnered up for another great event and obviously well organized. I will continue to participate in this race as long as my body holds up!

When it was announced that 2021 would be the last year for the Mt. Rushmore Half for awhile— had ...