Write a Review
What did you think of the race? Share your thoughts! Write a Review
Kristen recommends this race
2014
"Great bling and a fun course" 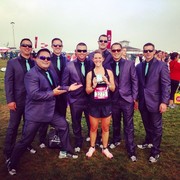 The Nike Women's Race Series has a reputation as the end-all and be-all for female runners, and for good reasons. Nike puts on a show from start to finish, and the end result is a fun, girl-centric weekend that makes this the perfect run-cation with friends.

What I Loved:
-You can't review a Nike Women's race without talking about the Tiffany's necklace. This year's design was a vertical bar with a San Francisco-inspired pattern engraved on it, on a long chain. Beautiful.
-The course. Despite being a Chicagoan with little hill experience, I think this course was definitely manageable, even for a beginner runner. The first hill at mile two was long but most people were able to run up it. The monster hill at mile 10 was TOUGH, but I loved the way Nike used signage to alert you that the hill was coming and to motivate you to get over it. The cheering section at the top of mile 10 (especially the November Project SF group) was amazing as well!
-The course support for the race was few and far between, but Nike did have cheering stations set up regularly featuring gospel choirs, local cheer squads, drum groups, a "chocolate mile" at mile 11, and more. Crowd from mile 11 on was good.
-The goody bags were stuffed with snacks, and the finisher's tank top is a great quality technical tank.
-The expo has amazing sponsors and activations. Whole Foods, Spotify, Paul Mitchell, Neutrogena, Nuun, and more.
-Finisher's chute was awesome, with chocolate milk, banana, a Whole Foods bag filled with snacks, and of course, the necklace.
-Post-race festival is nice and spread out, with a huge finisher's boutique and large stretching area.
-I've heard that in years past, the finisher's chute was really backed up due to the Tiffany's pick up, but that wasn't the case this year, since the handsome men in tuxes weren't the ones handing out the boxes (volunteers did)
-I was lucky enough to have access to the VIP tent postrace and it was amazing, with a full bar, HUGE breakfast buffet (including donuts and breakfast burritos), lounge areas with couches, and massages. Definitely worth the splurge.

What I Didn't Love So Much:
-As many people have mentioned, the Expo will have lines no matter what time you go. I went on Friday around 11 and didn't do half the things there because the line was so long.
-The start line was a mess. I was in the 8-8:59 corral, and my first three miles were very slow due to having to pass walkers. I realize that this is a race geared towards first time half marathoners, which I love, but walkers should have been at least in the next corral back.
-The VIP area before the race didn't have separate bathrooms, which I thought would have been a given, or bananas as a pre-race breakfast option, another typical given.
-Around mile 2, there was quite a bit of confusion as the runners turned to go right and follow the course and volunteers started yelling at us to go straight. I and several other runners stopped in confusion, eventually turning right to follow the original path. I realized later that they were splitting us up to thin out foot traffic (they did it again later in the race as well), but it was poorly executed and a little stressful.
-I found the aid stations a little lacking. The first aid station I ran through showed that it was passing out water, which I took. I then went back for a second cup and was surprised to taste not water, but Nuun. Not what I was expecting and not really what I wanted. There were a ton of food options later on in the course- Cliff shot blocks, Lunabars, which I found to be somewhat unnecessary but a nice option for some runners. Also, tons of trash cans for people to toss water cups- a very San Fran touch.
-One of the biggest calling cards of these race series is that in years past, a fireman in a tux or something has handed you your Tiffany's necklace. They didn't do that this year, to cut down on lines, which was great with me; however, instead, the fireman were just awkwardly standing in the middle of the post-race festival waiting for girls to ask for pictures. I think it would have made a lot more sense for Nike to place the handsome guys by the photo opportunity tents, where they had four different backdrops you could take your picture with, instead of just in the middle of a field.

Overall, I think this is a great "splurge" race worth doing at least once in your running career!