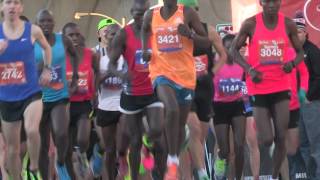 What did you think of the race? Share your thoughts! Write a Review
Laura recommends this race
2015
"Great Inaugural Event!"

What a great way to celebrate running in Milwaukee!

First off, the expo and t-shirts/SWAG: I volunteered at Packet Pick-Up. Packets were organized alphabetically by name and runners were given their long-sleeved tech shirt. Shirts were gender-specific and participants could exchange sizes there if they wanted to. Pins were not put in the packets but were out on the table for runners to grab if they wished.

There was a variety of vendors including Brew City, which had made all the official gear for the race. I will say, I hope next year they have a bigger stock of sizes because every shirt I asked about in a women XS they had sold out of. There was also some gear (including the official In Training shirt) available on their website for most of the year leading up to the event.

Packets also included discounts for other races coming up and coupons for local businesses.

Aid Stations: Aid stations were about ever 2-ish miles with both Nuun and water available. Local groups volunteered to run them and were super energetic and fun! I do think that the first aid station needs to be closer to mile 1.5 instead of mile 2.5, especially since some of us (read: me) didn't have a chance to use port-a-potties at the start and really had to pee.

Course Scenery: This course did a great job of showcasing the wonderful areas of Milwaukee that a lot of people don't get to see. Being able to run from the lakefront to Lake Drive, through the East Side, by Lakefront Brewery, through Downtown and then past Marquette (where the 1/2 and the full parted ways) and then headed back toward the Third Ward and the Summerfest grounds. The course really reminded me that Milwaukee is a very beautiful city!

Elevation: I felt like there was a decent amount of elevation change! It's definitely not a flat course!

Parking: There are a lot of parking lots near the start/finish that charged $5 for parking, otherwise you could find a street spot for free. It was easy to get in and out of the lot before/after the race.

Race Management: I feel like the race management did a lot to promote the event and really make it a community-centered, family-friendly event. Kids could trick-or-treat at the expo from the vendors (who all had candy to give out), build-up runs were held every Thursday evening and Saturday morning. There were frequent Facebook updates and e-mails sent out.

Some things that need to be improved on:
- there was no beer post-race because the liquor license hadn't been approved; this info was posted on Facebook the morning of the event. Sprecher was giving out root beer but no one at the finish knew where to get it. Sprecher Brewery also was giving out free tours to participants in lieu of the beer, but only until 3 pm that day.
- the post-race party was pretty lackluster. There was supposed to be food for the finishers (indicated by a tag on our bib) but there wasn't anything, no one knew where the root beer was to be acquired, and besides the results tent and a Nuun tent, there wasn't really anything to keep people hanging out there after the race.
- there need to be more port-a-potties at the start. I also heard that the VIP tent was supposed to have port-a-potties but didn't.
- the medals didn't have a race-specific distance. I really didn't care, but I could see the marathoners wanting something that indicated they had finished the full marathon.
- the start was not corraled and I really think that, even though there were only 4,000 runners, there need to be corrals for organization.

It's little details like that that, if fixed, will make this a must-do event! The finish party definitely needs to be beefed up!