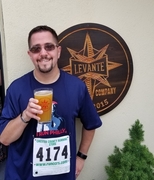 This brewery had been on my to do list for a bit. They hosted a 5k, win-win! In general, isnt breweries hosting races the perfect combo?! Lol

Pre race: there is a 5k relay before the 5k race. Get there early, but park a few businesses down to stay out of the way.

Race: loop course x3. Loop starts with a few .2/.3's going around the nearby businesses. One of the turns seems a bit narrow during the first loop before the congestion breaks up, but not bad during lap 2/3. After going around the businesses, there is a straight away decline of about .5. Turn around and up that incline! It's got some steepness to it! You get to do that 3x! After the hill levels out, around the brewery to complete the lap. Repeat.

Post race: party at the brewery! Great beer and selection. There was a food truck, but that didn't arrive for at least another hour.
I don't require games at a brewery, but there wasn't any. Unlike a few other brewery races.

Swag: brewery pint glass and 1 beer of choice! (excludes imperials). I do like the option of choice, but I could see how it would move more smoothly if the one free beer was pre determined/ poured ahead. There was 4 ppl pouring, the line was a but slow. If you're hanging out after the free beer, it does get more manageable.

Scenery: none, it's a business district.

Parking: 30 or so spots by the brewery. Brewery is in a business district with plenty of spots for overflow. There is a relay race before the 5k, encourage relay runners to park outside of the 5k course. There was a few cars trying to drive through the 5k.

Aid:I don't require water mid 5k. But someone pointed out there wasn't any? There wasnt. There was an ambulance on site just in case.