Write a Review
What did you think of the race? Share your thoughts! Write a Review
Laura recommends this race
2015
"First Trail Race" 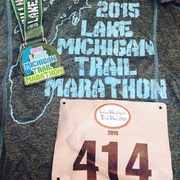 There are 4 distances offered: half marathon, 20 mile training run, marathon, and 50K. Medals are given for all distances EXCEPT the 20-mile.

Cost ranged from $50-60 for the half if you registered in advance. Race day registration was $70.

Swag included a goody bag, shirt, and the finisher medal. Non-personalized bibs given to all runners. Packets could be picked up at Performance Running Outfitters in Brookfield on Saturday (the day before) or you could pick up your packet on race morning beginning at 5 am.

The start times were staggered with the longer distances starting beginning at 6 am. The half marathon started at 7:30. The race is timed and bibs have timing chips on the back.

There are 5 aid stations along the course that have water and Sword sports drink. The 2nd aid station at Grant Park had bananas for participants if they wanted one. One thing I have to comment on is that the Sword drink is clear and looks like water; some of the volunteers kept getting them confused. I personally didn't like the taste of Sword and was accidental given it at the last two aid stations by volunteers who thought they were handing out water. I prefer Gatorade at races.

The course is absolutely beautiful. The issue I had is that some of the heavily wooded areas that we ran through, the race path wasn't clearly marked. Some of the mile marker signs had gone missing so unless you had a GPS watch, you weren't really sure where you were. Even some of the course sentries weren't sure.

Some parts of the trail were extremely narrow and we were running single file. There was a lack of course etiquette from some of the longer distance runners in these areas. Something to be aware of.

The distance between the 3rd and 4th aid stations was, in my opinion, too far considering the high temps and the high humidity we encountered the morning of the race. All aid stations had port-a-potties at them, which was nice.

The last three miles of the race are on the Oak Leaf Trail along Lake Drive and there is no shade to be had.

The finish line was somewhat anticlimactic, although there were a fair number of spectators, mostly for people running the 50K and the marathon. Volunteers handed out medals, water, bananas, and cookies.

I would recommend this race, but I also offer these words of advice: look at the course beforehand, come prepared with your own liquids and GPS watch, and make sure you have ways to stay cool! September in Wisconsin is very hit-or-miss regarding the heat, so it's better to be prepared!