Write a Review
What did you think of the race? Share your thoughts! Write a Review
Amanda TheSwagMama recommends this race
2017
"Hill Yeah!" 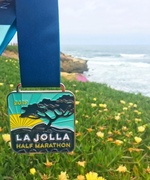 I went into this race thinking that I would by angry by the end of it...but I was pleasantly surprised!

Expo: The expo was held at the Del Mar Hilton and had lots of vendors and opportunities to buy race day essentials. When you first walked in, there was a horse prop set up along with some other photo props. I signed the horse and then headed into the expo. There were plenty of volunteers guiding foot traffic which made it easy to find my bib and tshirt...then I picked up a few samples and chatted with a couple of vendors before heading out. There was also a spot to buy some La Jolla Half merchandise (I regret not buying a hat, they were super cute.)

Pre-race: The Porta-Potty situation really wasn't too bad. There were a lot of lines, but they moved pretty quickly. Then I dropped my bag off at gear check (also a short line) and headed over to my wave. The waves went pretty fast so it wasn't long before I was headed off to the hills!

Course: The first 5 miles are pretty normal and then you hit the massive Torrey Pines Hill. There are no water stations while you're in the Reserve, but there are lots of volunteers cheering you on and encouraging you along the way. After that, there is a steady climb before you finally hit some fairly flattish miles and descend again. Then you hit the 11.5ish mark and are greeted by another hill! Yay La Jolla! But what goes up must come down and you descend once again into some beautiful views before finishing out the last quarter mile or so on some flat terrain.

Course support: There were tons of volunteers, water/electrolyte stations, and Race Guards all throughout the race. As far as crowd support, there wasn't as much as I've seen in other races...but there were some people scattered throughout the course with signs, cowbells, and high-fives!

Course Scenery: THIS is why this race is so highly-rated by myself and others. You will not find scenery like this anywhere else! You get to experience all of the amazing parts of Del Mar/La Jolla and it's absolutely breathtaking! You get to run down the 101, through Torrey Pines State Reserve and along the boardwalk in La Jolla. It truly is an amazing and breathtaking experience!

Post-race: Once you cross the finish line, you snag your medal and food bag and then go off into the festival. It is a bit cramped, but you can find some open areas. The line for the beer garden wasn't too long and I got in pretty quick. Once you're in you are allowed 2 craft beers and then you can find a spot to relax for a bit. Afterwards, I checked out a couple of vendors, grabbed my bag that I had checked (super easy, no line), snapped a couple of pics and then headed over to the shuttle bus. There was a short line for the bus and they are nice and air-conditioned! The traffic getting out of La Jolla was a little congested (nothing new here), but once we hit the freeway it was a quick drive back to the start line parking lot.

SWAG! - The medal is a great quality and depicts a picturesque scene of La Jolla. I also love the tech shirt because of the color and the fact that it' s V-neck. The expo swag was nice too! I got some great nutritional samples, an acai bowl sample, headband, shoelaces, and a coupon for a free bike ride at a new Cycling place opening up soon. The post race swag included chocolate milk, coconut water, fig bars, and other food samples. Also, I always count scenery as swag and that was the best swag of all!

Overall, I really enjoyed this race and surprisingly enough I would do this again, even with all those challenging hills! It's also part of the Triple Crown Series, so if you want that extra bling then La Jolla is mandatory! Don't let the hills scare you, this course is totally doable and you won't regret experiencing the amazing views! :)