Write a Review
What did you think of the race? Share your thoughts! Write a Review
Jenn Savedge recommends this race
2018
"2018 Indianapolis Monumental Marathon" 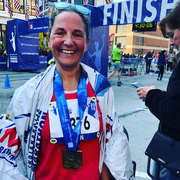 Ran my first Indy Monumental Marathon yesterday and I have nothing but great things to say about this race! I'll break it down a bit:

EXPO
I got into town at 7pm on Sat night (due to some construction on my route) but as the expo was open until 8pm, I had no problem picking up my packet and even doing some shopping. I stayed at the Sheraton which was less than 1/2 mile from the Expo and the start/finish lines as well as plenty of places to eat and get some morning tea/coffee.

COURSE
Freakin' beautiful. Seriously! I had no idea that Indianapolis was such a pretty city but it truly is. The course took us through lovely neighborhoods, a park with gorgeous fall foliage, and alongside a river (the White River?) with stunning views along the way.

Volunteers were plentiful everywhere from the Expo (where they are standing in key locations offering to take pics and answer questions) to the finish line (where they are literally walking through the crowd of finishers asking what they need and what questions they might have.

The race started on time and the course was well marked. There were plenty of aid stations although I did notice that you did not know ahead of time where they would be. The map just said that there were 19 aid stations along the course but it did not say where. That was fine with me and I never felt like they were too spread out, but I know some people like to plan ahead with their water, gel, porta potty stops.

One great feature of the race is that I was able to get a printout of my official time immediately after crossing the finish line. I know some races have apps you can use and this is awesome too but I really pushed the pace yesterday and I don't think I would have had the energy or coordination to fumble with my phone like that. It was nice being able to just walk up to a volunteer and have them look at my bib and print out my time (and even nicer since it as my first sub-4!)

All in all I had a great time at the Indy Monumental Marathon and I would highly recommend it to anyone looking for a PR, a BQ, or just a beautiful fall race.