Write a Review
What did you think of the race? Share your thoughts! Write a Review
Heather recommends this race
2016
"Awesome Group Stage in Chicago (Team Red Route)!" 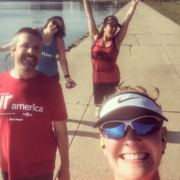 The United Relay of America is the first of it's kind. It's a non-stop relay (running and cycling from one stage to the next), with three different routes, all meeting in NYC on June 4. The starting points for the routes were Seattle (red route), San Francisco (white route), and Santa Monica (Blue Route). Usually I do a Pros and Cons list, but I think for something like this it'll be better to just explain how it all went.

I took part in the group stage (318) in Chicago on Tuesday, May 24 beginning and ending at the Park at Lakeshore East starting at 7:15am. The weather was in the 70s and sunny - a gorgeous (though warm) day on the Lake. The water was calm and sparkling, and we got some great photos with the city as our backdrop. There were 6 of us, plus 2 crew support that ran with us. It was for a 5k loop, which the leader (the first person to register) helped create. When registering, you also chose one of about twenty charities to help fundraise for. There was no fundraising minimum. I chose to support All Out, a charity that campaigns for equality for LGBT people everywhere.

About a week before our leg, I received an email from the RD (James) with information regarding start/end points, the other runners along with their contact numbers, and other helpful info.

Since it wasn't a race, there were no aid stations, which is the only reason I said 1 star. For a 5k I didn't deem it necessary anyway, plus I brought my own water since it was hot/sunny out, plus along the lakefront there are water fountains available too.

The 5k was super laid back. Anyone could run whatever pace they liked. I said I would be on the slower side doing run/walk intervals, and two other girls said they would run with me (even though I insisted they could go ahead, since I knew the area and would be ok). Super sweet of them. The only girl had done the leg leading into the 5k (11 miles) and decided to do the 5k too. Richard, one of the crew who had been with the relay since the beginning of the route in Seattle, also ran with us. I say ran, but really about half way through, we were stopping for photos, we did some passing off of the baton, and chatted. We had a great time getting to know one another, and did some group shots over by Buckingham Fountain. By the last mile, we ended up all together (except for one girl who was speedy and had to get to work so couldn't hang around) walking and talking.

It was great to meet some new people, and I'd say we'd all call each other friends by the end of it. Hugs all around. I was wishing I had had the time to run more legs, because everyone involved were so great. I will definitely be looking into running this relay again next year, and hoping to grab some friends to do other legs together.

For the t-shirt, we received a code to use on the webpage that was for a free shirt. The shirt we could get was for free (cotton only), but you had to pay $5 flat rate for shipping. They also sold some tech-shirts as well as a sweatshirt if you were interested. The shirts came in Red, White, or Blue - I suppose you could pick any color you wanted, but I wanted to rep red route so I got a red shirt.

I've been following the adventures of the Red Route (and the others) and it's been so fun to see all of the places they've been since leaving Chicago. Looks like they are having a blast. Please consider keeping this great relay on your radar for next year. Not all of the slots were filled and it would be great if the crew didn't have to do so many legs themselves - they must be tired! It also benefits so many great causes, and being able to pick which one you want to fundraise for is pretty cool.