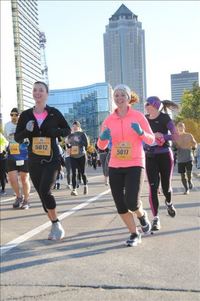 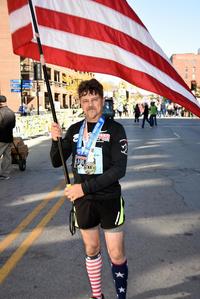 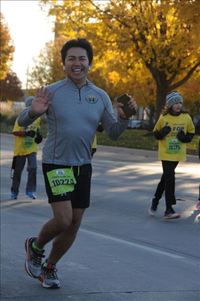 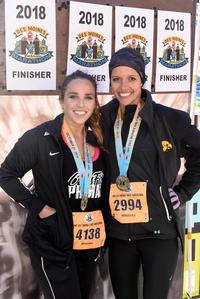 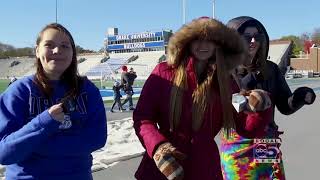 Please accept a personal invitation to race with us in Des Moines. Whether your 1st or your 100th, the IMT Des Moines Marathon offers a race distance for all ages & abilities. A great option for the 50 state members with the I-35 Challenge weekend partnership with the Kansas City Marathon presented by Garmin.

What did you think of the race? Share your thoughts! Write a Review
Angie Maske-Berka recommends this race
2019
"Flat Fall Half" 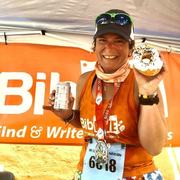 The 2019 event took place on Sunday, October 20. The half marathon starts at 8:00 am, with the marathon, then the 5k follows. It was a beautiful fall day, sunny and temps around 50-60 degrees.

*I ran the marathon last year and was excited to check out the half.

Registration: This was available online, and the price increased up until race day. You could also register at packet pick up, no race day registration. You could also transfer races at the expo. Included with registration was a bib, chip timing, bag pre-stuffed with samples, and a distance (& gender) specific finisher's jacket. There was an option for a VIP package too. A Virtual bag was sent via email.

Expo / Packet Pick-up: The expo was held at the Iowa Events Center. Parking was $10 on site or metered street parking was available. This was open on Friday and Saturday. If you were not able to get your own packet, someone else could get it for you. No race day pickup. The bib was in an envelope and they put it in a pre-stuffed clear bag, and then waited in line to get jacket. the bag doubled for gear check.

The expo itself had a handful of vendors, including race branded merchandise. I was on a time crunch, so after I transferred races, I walked through quickly. I registered to win a free entry and purchased a new hat. It was easy to navigate.

Pre-race: There were Port-o-potties near the starting chute. The chute was back fed, and you lined up with the pace you would like to run. If you wanted to run a fast pace, you had to snake through people. The National Anthem was performed and some announcements were made. There was parking on the street for free, or ramps were available.
*I had the opportunity to pop a tent in a parking area near the race. This allowed me a place to hang before and after the race. I was also able to keep warm clothes in this area and I did not need to use gear check.

Race/ course: The half starts in downtown, then runs out to Water Works Park and Gray's Lake.
-Elevation: Flat! Strava had 144 ft of climb, I don't recall any steep climbs
-Terrain: paved /asphalt surface
-Course markings: each mile was marked with a teardrop flag. There were some timing mats at certain markers along with a clock.
-Aid Stations: There were many aid stations on the route and each had water and Gatorade. However the drinks were not well marked, maybe one aid station had 2 different colored cups. The drinks were mixed in the stops, some volunteers shouted which drink they had, but some just stood there and I had to ask them. There was also bicycle support, they roamed the course with supplies including tissues and candy.
-Medical: there were flags that noted these stops and I saw them at least twice.
-Spectators: There were many spectators near the downtown area, which is the starting miles and finishing miles. There were a few in the middle miles, but energetic.
-Entertainment: Lots of on course music! Rock bands, solo acts, symphony bands, and DJs.
-Photography: MarathonFoto was on course, images available for a fee the next day.
-Port-o-potties on the course - I didn't need to use one, but I remembered seeing people waiting to use them.
-Scenery: Lots of city streets, but running across the Gray's Lake bridge is cool.
-Volunteers / law enforcement: The course was always safe, all intersections with law enforcement.

Finish: Also the starting line. It was marked with an arch and timing clock. The announcer was catching names as people finished. Each side was lined with spectators. The idea was you got a medal and bottle of water at the finish line. The medals were distance specific and they opened up like a locket. (If you did the combo challenge, they fit together.) Then the chute was long enough to have an area for post run photos. From here you could take a left turn to the post race food, or go straight through to the music and beer.
*I happened to finish the half marathon, just seconds before the lead marathoner. This created a bottleneck at the finish line. I crossed the finish line to a crowd of people holding up their phones, wanting to take a photo. I had to go find the half marathon finisher medals.
I did not access the post race food as the line was a half block long when I finished. If I remember from the past year, they do offer more than just a banana. I did easily access a Sam Adams beer.

My Race: I originally registered for the full, but I just hadn't trained for it, so I was running my 5th half of the year, 56th overall. I knew the weather and the course were the perfect conditions to do my best. I started the race and a friend running her first marathon caught up to me, so the first 3 miles before the races split went by quick. Then I was off to Water Works park, and it was where the half marathon had an out and back section, so I was able to cheer for my friends. I was feeling good, maybe a little confused with the aid station offerings, but I also took an orange and found some vaseline from a biker. I just kept cruising to the finish line. As I mentioned above my finish line experience wasn't the best, volunteers just needed to separate the course better and keep people out of the way. However, I pushed stop on the watch and had a time near 2:16, which is my best this year. I also went back and looked at my splits, to which I ran negative splits. I also just felt really good, no aches or pains. I wasn't up for waiting in the food line as I knew the tent where my things were had donuts!!! It was nice to have the tent, many people stopped by to chat too.

Overall: This is a nice Iowa race. The price is comparable to other area races, the on course music was great, transferring was easy. I will say the full marathon shows you more of the city, but the half is perfect for setting a PR. I do know that aid stations and finishing chutes are easy fixes. I hope to see a different option for race photos in the future. If this fits in my schedule I will try to run it again.

This website uses cookies and pixels so we know how people are using the site and to ensure you get the best experience here and elsewhere on the internet. That cool?
View our Privacy Policy