Write a Review
What did you think of the race? Share your thoughts! Write a Review
Tom recommends this race
2015
"Fun Race With Some Great Military History" 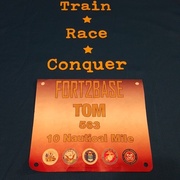 Sometimes you sign up for a race so far in advance that you almost forget about it right up until race day. As much as I hate to admit it, that was the case for me with this year’s Fort2Base Nautical 10 Miler.

I have a bunch of interesting races coming up over the next few months, which include a trail run at 10,000 Foot Elevation in Colorado that’s supposed to be one of the most beautiful half marathons in the world, the Runner’s World Half Marathon, my daughter's second 5K, and the Honolulu Marathon.
So a small local race in the North Chicago suburbs at the end of August that I signed up for at the Shamrock Shuffle Race Expo way back in March when it was still freezing outside kinda took a back seat on the priority list. What the hell is a Nautical 10 Miler anyway? (I’ll get to that in a minute…).

With all of the other training I’ve been doing, I knew I’d be able to get a fairly decent finishing time for this one, so I never really put much thought into it. Fort2Base turned out to be an awesome race though. If I would have known how much fun it was going to be, I would have reached out to all of my Chicago area running friends and told them to join me.

It turns out that some of them were there anyway. I ran into a few friends at the start line and a few more at the finish line….

So what exactly is a nautical mile? Here’s the long answer:

<ul><li>A mile (also called a statute mile) is 5280 feet and it’s based on some random number that someone decided would be a good way to measure “a thousand paces” during the reign of Queen Elizabeth I in England.</li><li>
Nautical miles were developed to aid in navigation and are based on degrees of latitude around the equator.</li><li>
The equator as a giant circle. All circles have 360 degrees, and each degree can be divided into a 60 minute arc. (Remember high school geometry? Never thought you’d use it again, did you?). In the case of the Earth, each minute represents one nautical mile, which is about 6076 feet.
</li><li>To travel around the circumference of the Earth, you would need to cover 21,600 nautical miles (360 * 60) or 24,857 miles.</ul>

If you’re still awake after reading all that, the short (and much more straightforward) answer is that a nautical mile = 1.15 miles. So 10 nautical miles = 11.5 miles.

Now that we have that out of the way….

2015 was the 5th year for Fort2Base. The event attracted just under 1800 runners total (1236 for the nautical 10 miler and 558 for the nautical 3 miler). It’s held in the far North Chicago Suburbs (almost near the Wisconsin border) and is a point-to-point course, which passes through two historic military facilities:
<ul>
<li>The first two miles of the course go through Fort Sheridan. Fort Sheridan was built in 1887. It was used as a training center during the Spanish-American War and was also used to help wounded soldiers return to civilian life after World War I. A number of well known officers, including George Patton, served there at one point or another during their careers. The fort was closed in 1993 and other than a small area that’s still owned by the Army Reserves, the grounds have been converted into neighborhoods and forest preserves. A lot of the original buildings from the fort are still standing though and it’s a very cool place to run through.
</li><li>The last two and a half miles go through Naval Station Great Lakes. Great Lakes opened in 1904 and is the home of the United States Navy’s only boot camp. The base is essentially it’s own small city with over 1100 buildings, a fire department, a police station, a museum and its own public works. About 40,000 recruits are trained there every year. Runners enter the base just before mile 9 and do a loop around the Clock Tower Building (which includes a massive hill at mile 10) before crossing the finish line.
</li></ul>

<b>Best things about Fort2Base</b>
<ul><li>The location. Words can’t even begin to describe how happy I am that this race wasn’t on the Lakefront Path. First, let me say that there’s nothing wrong with races on the Lakefront Path and the path itself is one of the best benefits of being a runner in Chicago. That said though, I’ve done so many races there that they’re all starting to feel the same. Regardless of whether they start on the South side of the city in the Soldier Field parking lot or on the north side at Montrose Harbor and regardless of whether they’re 5Ks, 5 Milers, 10 Milers, or whatever, I’ve done so many races on those same two sections of the Lakefront Path that I can probably do the next one blindfolded. In fact, the next time I sign up for a race on the Lakefront Path, I might actually try that just to mix things up a little bit. Fort2Base is close to Lake Michigan, but it’s so far north of Chicago that the course doesn’t touch the Lakefront Path at all. Instead, it’s on the Green Bay Trail… which I had never run on before. It was a welcome change of scenery.</li><li>
The start and finish lines. Being able to run through two historic military facilities is awesome, and the fact that Great Lakes is still open is even better. There were Naval Officers, Marines, and other military personnel scattered throughout the course directing traffic and cheering on runners, and some of the buildings we got to run past were awesome looking.</li><li>
Hero Hill. At mile 10, there’s a massive hill (like 12% grade) called Hero Hill. The hill is only about a quarter mile long but it’s extremely steep, and after you’ve just finished running ten miles, it’s not exactly something you’re looking forward to running on. Some people might list a hill like this as one of the ‘cons’ and in any other race, I might also. Honestly though, in that particular setting, it was one of the coolest things about the course. Sure it was tough, but there were also naval officers standing alongside the course shouting out words of encouragement and in some cases even running up the hill alongside runners who looked like they were struggling. It was a cool thing to see and getting to the top was a great feeling.</li><li>
Awesome medals handed out by marines. For a race this small, the finisher’s medals are seriously awesome. They’re about four inches around and have an engraving of the Fort Sheridan Quartermaster Tower on one side and the Great Lakes Clock Tower on the other. This is one of the coolest race medals I’ve gotten all year. The 3 nautical mile medals are similar to the 10 nautical mile medals but just a little bit smaller. The neck bands for both medals have an American Flag on one side and the five U.S. Military logos on the other. The best part of it is that there are Marines standing at the finish line handing them out.</li></ul>

<b>“Take it or leave it” things about Fort2Base</b>
<ul><li>The narrowness of the Green Bay Trail. This really didn’t bother me but I overheard a couple other people talking about it so I figured I’d mention it. From the start until about mile 2, the course goes through Fort Sheridan and it’s on roads. From Mile 9 until the finish, the course goes through the Great Lakes grounds and it’s also on roads. But the 7 mile stretch between the two is on the Green Bay Trail, which is a paved bike trail. The trail is pretty narrow. Its entire width is about the width of one lane of a regular road. This makes passing people a bit difficult. The trail is also open to the public during the race so there were bikers and other runners at some spots along the course. Luckily the race started early enough that there really weren’t very many of them. Like I said though, this really didn’t bother me. There were a couple times when I had to get a little bit creative when I wanted to pass someone, but overall it wasn’t a big deal.</li><li>
Shuttle Buses. This isn’t about the buses themselves as much as me having to get up at 4am to make it to Rosalind Franklin University in time to catch a shuttle bus to the start line. Logistics are always a bit rough on a point-to-point course and I’ve seen race directors solve the issue in a variety of ways. In this case, there really wasn’t enough parking at the start or the finish lines to accommodate all of the runners, but there were plenty of spots available at the university, which was about a mile away from the finish line. There were shuttle buses that ran from the university to the start line in a continuous loop from 5am until 6:15 (the race started at 7:00) and then from the finish line to the university after the race. Like I said, this was a fine way to handle the logistics of getting runners from one place to another. But since I live in the far south suburbs, it took about an hour and a half to drive to the far north suburbs (big city problems). So I had to leave my house pretty early. This obviously wasn’t the race directors’ fault. A friend of mine who also lives in the south suburbs mentioned that she had gotten a hotel room close to the start line the night before the race so she could sleep a little later in the morning. I might have to steal that idea next time.</li></ul>
<b>The one “bummer” thing about Fort2Base</b>
<ul><li>No photography allowed at Great Lakes. This was really the only downside of the race. Again, it’s not the race directors fault – it’s Military Policy. The US Government (understandably) doesn’t want people running around one of its active military training facilities taking photos of things that could potentially be sensitive to national security. This wasn’t just for the race. Even regular visitors to the academy aren’t allowed to take pictures.</li></ul>
I honestly can’t think of any other bad things to say about Fort2Base. I thought the race was a lot of fun and really well organized. I also loved the military theme, the medals and the course. I’m not sure how I hadn’t heard of this race before but I’m glad that I know about it now. I’ll probably run it again next year. And when I do, I’ll make sure to make a bigger deal about it and bring more friends with me.