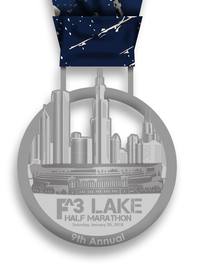 What did you think of the race? Share your thoughts! Write a Review
Heather recommends this race
2015
"Great winter race - pre/post race INDOORS!" 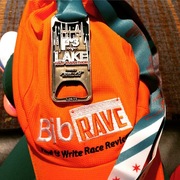 This was my first year running the F^3 Lake Half Marathon, held this year on Saturday, January 24.

PROS:
+ Packet pickup on multiple days throughout (6 days) and different locations.
+ No line at packet pickup - just showed my ID and got my Goodie Bag.
+ High-quality knit winter hat and a pair of gloves (which actually fit me well), plus a drawstring backpack.
+ Ability to pick up packets for family and friends with a copy of their ID or registration email.
+ Took place at Soldier Field - easy to access via public transit or driving.
+ Parking available at Soldier Field; was a bit of a line to get in, but took maybe 5–10 minutes, not an issue for me ($22).
+ Pre and post race hanging out was inside the United Club, so got to go from parking garage straight inside, about 10 minutes before race we were led outside, then post-race party was back inside the United Club until 4pm.
+ Clearly marked course and mile marker flags.
+ Great to run so far south on the path - nice to have some new scenery.
+ Post race beer was Goode Island.
+ Unique medal - it was a bottle opener and rectangular rather than round.
+ Water and Gatorade at the aid stations.
+ Since the pre/post race was indoors, access to inside bathrooms with running water and soap was awesome (they also had some port-o-potties at the start line and at most of the aid stations, I think).
+ 10am start time (the chance to sleep in later).
+ Race management has no control over this, but the weather was just about as perfect as it can be for late January in Chicago - mostly sunny, mid-high 30's (and a bit of wind, but that's ok).
+ Great, energetic volunteers.
+ The course was clear of snow and ice, though it had some puddles from the sun melting what was on the grass (didn't matter to me, but like to point out all aspects).

CONS
- No race day packet pick up (can be a nice option for those that have a hard time making it to the scheduled days - not a huge deal since they had so many days and locations available).
- I just came off of the Dopey Challenge, so was more back-of-the-pack than usual (especially with a smaller field of runners than usual on a half marathon Chicago course), and the last 2 aid stations no longer were giving out water/gatorade.
- No more hot chocolate, chocolate milk, OR KIND bars when I finished. The only thing available to me was some water filled in cups at the finish line and beer inside. The concession stands were open, so I could have bought some food, but I was disappointed I didn't get a KIND bar or milk.
- No bottled water or bottled gatorade at the finish.

This was a 5-star rating until I got to about mile 11 when I no longer received anything to drink. Granted, it wasn't hot, but I've been battling a cold and some water would have been nice. I was within the course pacing requirement, and there were still volunteers around, just no one handing out water, or tables with cups. While running by the parking lot near the aid station, I saw volunteers carrying the water gallon jugs - so they obviously hadn't run out. Just leaving one of those and some cups I would have poured my own if I needed to. Then, once I got to the finish line, there were no KIND bars or chocolate milk. I looked inside and couldn't find any either. I asked a worker if there was any hot chocolate left, and he said it was all gone.

These things added up to a loss of a star for me. I understand that being slower can mean less course support, but if you have a course time limit and people are within that, they should be able to receive the same support as everyone else. When I finish, I'd really like something to eat or a bottle of water, gatorade, or chocolate milk when I cross the finish line to help with my recovery.

So, that aspect was disappointing, but overall I loved the course, weather, and the whole indoor pre/post race was AWESOME. I thought that it was well organized and communication was clear and frequent. It's definitely a recommended race if you are looking to stay active in the winter :)