Write a Review
What did you think of the race? Share your thoughts! Write a Review
2015
"Eh - seems like a lot of hoopla for a "Fireman" to give me a medal." 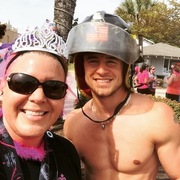 This race has me conflicted. I had a great time with my girlfriends and it was my birthday weekend - so in that regard I had a great time. However the race felt a little bit like I had walked into a Vegas Strip club - grown women swooning over "firemen" and no freebees.

Lets start with the expo. Terrible. For a national race series this was the smallest and worst expo I have been to in all my races. Yes, it had everything you needed - but not much more. It filled the gym of a local high school with plenty of room to spare. The Diva merchandise was appallingly under stocked and the sizing of the shirts was not reflective of the attendees at the race. All the shirts were women's cut and were about two sizes too small. That is if you could find a shirt larger than a M. There was a shuttle service from the parking area to the school which was quick and make getting around very easy.

You did get a pink tutu as part of your SWAG. I cut mine up and wore part of it on my head. :-)

The host hotel was no where near the start or the finish line - which I find curious. Parking the day of the race was easy if you got there early - which we did. So either you stayed at the convenient hotel and then had to move for the post race party or you drove to the start line and returned to your hotel for the party. Odd.

The course itself was relatively flat and wound though neighborhoods. There was no beach part of the run at all. There were two sections where we were running along a major roadway and through the neighborhoods they had part of the street blocked off with no officers to monitor how fast the traffic was either going behind us or coming towards us. At times you could be running VERY close to a vehicle.

Less than a mile from the finish there is a boa and tiara stop. I appreciated this because who in the world wants to run sweaty with a feather boa. Once you came through the chute you were given your medal by bare chested "firemen" (cough couch - strippers). This made for a chaotic finish line as women were trying desperately to get photos with either the entire group or each one. Once you got through the chute there was the champagne and chocolate touted so much on their website. We were rushed though and got a half serving of champagne and skipped the chocolate. The we were our in the crowd. There were a lot of participants and spectators at the finish. We ended in a shopping district and there was very little seating and it became very crowded.

We came back to the hotel and washed up and changed for the big after party at the hotel. Mind you I think by the time we got to the hotel it was a good 4+ hours later and the party hadn't even started. There were no real drink or food specials. I'm pretty sure the party got going after we left - but everyone was hungry and didn't want to wait.

I do have to say the medal is no joke at this race. If you are a bling whore this is definitely one to add to your collection.

I had a great weekend with my friends but as for the race itself - I'm glad I did it and it is off my bucket list. But, I wont be rushing out to do another one anytime soon.