Experience a scenic race course that takes you throughout historic downtown Wilmington. The race travels across beautiful Brandywine Park on the Brandywine River, along prestigious parkways, through historic neighborhoods of Wilmington and past downtown’s Rodney Square.
Choose from a full marathon, half-marathon, 4-person marathon relay, 5k or kids fun run on Sunday. After you cross the finish line, celebrate your accomplishment at Tubman Garrett Riverfront Park for a great party with live music, vendors, and activities for the whole family.

What did you think of the race? Share your thoughts! Write a Review
Robert Shultz recommends this race
2015
"A Hidden Gem in Wilmington" 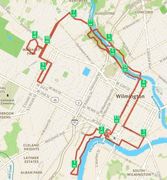 MY RACE:
The weather could have been better for this race. The day was VERY hot and VERY humid (92%). Although the rain held off it did not help. The heat has to effect any runner and it definitely made the run harder for us. The route took us all around Wilmington, including past the minor league ball stadium, the waterfront, the downtown, the zoo, a beautiful city park, quiet neighborhoods and their little Italy. You could not ask for a better tour of the city, which to me says a lot about the race. We finished strong, despite the many hills throughout the course and I am nothing but proud of my wife's performance.

Race Organization: 10/20
This is a small race, so it will inevitably have some hiccups along the way. The race organizations revolved around a beautiful little park on the water in Wilmington, Tubman-Garrett Park which provided a beautiful starting point and location for the expo. Except, the size of the park limited the size of everything. The park is not a large park and the expo had to resort to only having a couple of tents with just two vendors and one tent for the title sponsor (Discover Card). This park also caused the start line to be congested and chaotic the morning of. The bag drop off was hard to find, the corrals were almost non-existent (a 4-hour marathon runner lined up next to us behind the 11 min/mile sign because there was no room near the front) and the areas for the crowds were tight and caused more congestion on the streets. I told my wife before we stepped off that this race had out grown this park. In the future I hope that the race either rearranges the start line to better accommodate the size or works to stagger the start so that everyone can have a more enjoyable beginning.

Expo: 8/20
This rating might seem harsh but I cannot but help rank this expo compared to other races that I have been apart of. This race is small but it is the premiere marathon in the state and should have a better expo. As mentioned above, the primary reason that the expo is so underwhelming is because it is confined to the small footprint of the waterfront park. They try to make the best use of space that they can in this small area but there is no way that a proper expo can be accomplished in this small space. I would suggest that the organizers look at using the parking log of the neighboring waterfront market as the base for their expo in the future to allow for a larger one that can hopefully attract more vendors.

Race Experience: 18/20
My race experience after I started the start line was amazing. The route started along a beautiful water front trail winding through a lot of new development, office buildings and their minor league baseball stadium before heading into the city around mile 3. From miles 3-5 you went through parts of downtown and began the your run through Brandywine Park. In Brandywine Park you got the chance to run right next to the Wilmington zoo (close enough that you can hear and smell the animals) before making a u-turn our of the park and onto Park street where the hills truly began.

The next two miles included a constant incline before leveling off in a beautiful neighborhood. After running around the neighborhood you went into Little Italy where the greatest mid race snack I have ever had awaited. This snack was even better than the gummies at mile 23 of the Disney Marathon. Around mile 9.5 Bernies Italian Ice (Title Sponsor of the Wilmington Italian Fest) was passing out their signature Lemon Italian Ice. There could not have been a better mid race snack on such a humid day than a small cup of this delicious flavored ice!!! Around this same time we heard the police sirens that were with the lead runner, and defending champion Titus Rotich. As he passed us my wife was able to see up close just how fast he was running. We got to see him climb a small hill over a train track and experience just how impressive his athletic ability is.

To close out the race you run down the Park St hill we ran up after Brandywine Park and at mile 12 we turned towards the finish line for the final mile downtown. Only to realize that there was a final half mile hill facing us. We finished under our goal and looking back on the course I realized that I felt like I saw all of Wilmington while being challenged with the hills, the heat and the sun. It was a great course and such an enjoyable race.

Post-Race: 17/20
After finishing the race we sat down to relax and quickly was able to pick up our bag from the small bag check and got in line for the food that was provided. The food included sliders, chips, fruit, and drinks that all tasted good after the run. But what stole the show was Bernie’s Italian Ice being there with two extra flavors (coconut and cherry) along with their lemon that they had on the course. On top of all of these the race medal is one of my favorites and includes a spinning boat at the top along with sights from around the course. This race is an example for others to follow on what to provide to its runners. Finally, the park’s location along the waterfront provided beautiful scenery and after finishing any race it always feels good to relax after knowing you have worked so hard for the whole morning.

Extras: 18/20
Every race tries to have their perks that make the race memorable and worthy of the entry fee. The Delaware gave perks that few other races, at its price point, can provide. While at the race we were able to get a free Headsweats Hat, pint glasses with the marathon logo, a (with a discover card) a car magnet themed for the race and a mesh bag that I will definitely use again. The hat is one that I will definitely wear on future runs and is a much better hat than the one I received at the Shamrock half in VA Beach in March. This race is an example for others to follow on what to provide to its runners.

MY OVERALL EXPERIENCE: 71/100
This race had a little bit of everything. It had a great course that included urban, trails, hills, hot weather and fun. The expo could be improved but I think that this race is one that I would suggest others run. My two pre-race categories (expo and race organization) are low but all the categories that take into account the actual race and afterwards are very high. The race itself is a great race and has many positive aspects. I would suggest that this is a hidden gem, especially on the east coast were many high profile races take a lot of the attention. I am glad that my wife chose this race as her first half marathon and I hope that it will not be her only one.