Write a Review
What did you think of the race? Share your thoughts! Write a Review
Jess recommends this race
2014
"Rainy, Windy 5K" 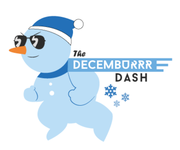 What a race. Run by Riff Raff Productions, the Decemburrr Dash 5K was well-organized despite the crazy weather. Let's just say that Ohio, the first week of December, can be very unpredictable.

REGISTRATION & FEES: I ended up paying $40 for this race because I signed up a few days before the race. That's a lot for a 5K, but I knew I wanted to run one before 2015 to set a good baseline for 2014. If you registered before October, I believe, the race was only $25. Not too bad!

SWAG: For running the Decemburrr Dash, you get a long-sleeved unisex cotton t-shirt (super comfy and perfect for lounging around in this winter). Because I registered late, I ended up with a large, but that's fine; they clearly stated that registration after a certain date would mean no guarantees for shirt sizing. Unlike many races in this day and age, there are no medals – but you do get a free drink ticket for World of Beer (a few blocks away). I skipped the post-race party at WoB to go home, shower, and eat, but that's not too bad a reward in my opinion. The only option for packet pick-up was race day, and that went off without a hitch.

RACE COURSE: The course started and ended in Scioto Audubon Metro Park in the German Village/Brewery District neighborhood in Columbus. Parking was super easy and I hid out in my car for about 45 minutes after picking up my packet (others had the same idea). I could see the race start from the parking lot! So if you're looking for convenience, this is definitely a great race for you. The race course takes you through a modified loop/out-and-back course in the park and along the greenway trail. A few things to note:

- There are hills. Getting from the park down to the trail (which is all either asphalt or packed gravel, barely noticeable) is HILLY. This is tough for a 5K, and you have a giant hill to climb back up in the last 0.5 mile of the race.
- You run over a small wooden bridge that covers a pond, and there are some turns to it. Watch your footing - this can also make it difficult to go fast because you don't want to slip in the rain and end up in the pond!
- Careful with the out-and-back. Thankfully this was a small-ish race of less than 200 people, but I can imagine if this race grows in size that it might be tough to have people on the narrow greenway.
- We were experiencing very windy and rainy weather on Saturday, but the greenway path runs along the river, so be prepared for wind regardless.
- There was one aid station at the turn-around point! I didn't want to slow down for any water, but I thought this was nice.
- There were volunteers posted along each turn, bend, and hill in the course, so you always knew where you were going. On top of that, the race management team had posted arrow markers on the ground. I found this very helpful, since in the past I have run races that have had zero course support and ended up getting way off track.

VOLUNTEERS: Oh bless their hearts. It was windy with temps in the high 30s and wind chills in the high 20s, PLUS constant rain on race day, and at least we were running. The volunteers were very nice and helpful, especially at directing us through the race course, cheering us on, and handing out water after the race.

I loved this race mostly because I achieved a huge PR, taking 4:30 off my last 5K time (35:49 to 31:19)! I would definitely do it again, but I would sign up earlier next time. Be prepared if you're going to run a race in the winter!