Write a Review
What did you think of the race? Share your thoughts! Write a Review
Preston Ramsey recommends this race
2016
"Glory to Columbus" 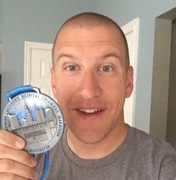 I ran my very first marathon ever back in 2004 and it just so happened to be the Columbus Marathon. I never ran another race beyond a 10k until 2015 when I took on Columbus again. This past year, in 2016, I returned once more and have essentially dubbed the Columbus Marathon as my "home race". When you look at all the things that go into this race as well as the city itself, it isn't hard to see why.

First, the date of the race. Almost always the 3rd Saturday in October, which generally means relatively cooler temperatures throughout the race. While sometimes unusually warmer temperatures or higher humidity sneak in to make the race a little tougher, this race is often very comfortable to run.

The Expo = A+. Always a great atmosphere with fantastic vendors and merch to check out. Over the last two years, more and more LOCAL (Columbus as well as Ohio based) vendors are getting in on the fun. All of the volunteers helping with packet pickup are always very friendly and are just as excited as the runners!

Parking. Any time there are thousands of people trying to get to a specific location, there are bound to be traffic issues. Plan, get there early, be smart. No different than any other major event.

The corrals/start line experience is awesome. I've been in Corral C all three times I've run this race. Lots of room to move, PLENTY of porta-johns, etc. The build up to the start is also very fun - great deal of music and fireworks that help enhance the positive atmosphere.

Along the first half of the course there are spectators EVERYWHERE! There are very few spots in the first 13.1 where spectators are absent. The energy is amazing from the casual observer, scheduled entertainment, aid stations, and - most importantly - from the Mile Champions (patients from Nationwide Children's Hospital). The spectator numbers drop off slightly during the Ohio State University section of the race, but pick back up on the way back into downtown.

The medal (see attached photo) is awesome - and a bit weighty! The strap on the medal serves as a reminder that you definitely earned it.

The Columbus Marathon is a great race and the City of Columbus is a great place to live, work, and play. From our thriving arts districts and green spaces to our historic landmarks and amazing local businesses (read: breweries), Columbus is the place to be.

Get signed up and come check out my "home" race. See you at the start line in October!