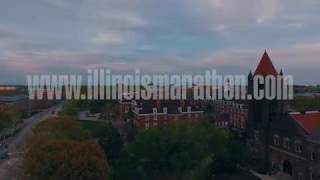 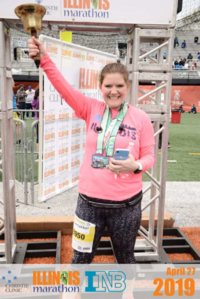 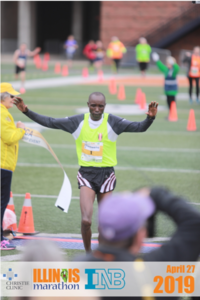 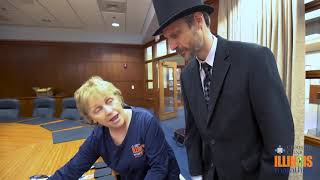 What did you think of the race? Share your thoughts! Write a Review
Heather recommends this race
2017
"Great way to kick off the racing weekend!" 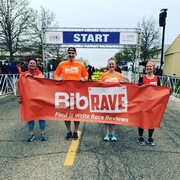 Illinois Marathon weekend for 2017 was April 20–22. The expo was held on April 20 and 21. Race weather for the 5k, which started at 7:30pm, was about 52 degrees dropping into the 40s during the race with about 15mph winds. The theme for the weekend this year was celebrating U of I's Sesquicentennial (150th anniversary)... so think balloons, birthday cakes, etc. The medals were super cute and they all had this cute 150 charm on them (minus the challenge medals).

PROS:
+ Pre-race weekend, there was plenty of race communication. They had a PDF of the event guide online that you could download to get a lay of the land before going into the weekend. Parking maps made it easier to know what to expect and where to go for not just the expo, but for the race as well.
+ I received entry as a BibRave Pro, but I found the prices to be very reasonable (5k started at $25 and ended at $45 online & $50 at the expo if spots were still available).
+ Expo was held on two days (Thursday and Friday). I went on Friday around 3:30 or so. Traffic was a little heavy, but parking was plentiful and well marked.
+ Packet pickup was easy and volunteers were everywhere in case you had questions on where to go. Grab your pasta ticket party in the lobby before heading in to the Gym to grab your number (they could scan the QR code you received via email the week of the race). It was well marked where you had to go depending on which bib you needed (5k, 10k, half marathon, marathon relay, marathon, or any of the challenges). Next up you head to the other Gym to grab your shirts. Again, well marked. I was doing the Full I-Challenge and only had to go to one spot to pick up my bibs and one spot to pick up my shirts/swag.
+ I loved that they had so many race options for the weekend - youth run, 5k, 10k, half marathon, marathon, marathon relay + challenged (mini = 5k+10k, half = 5k+half, full = 5k + full).
+ Full I-Challenge participants received a shirt for both the 5k and full marathon + a drawstring bag for the 5k + a nicer drawstring bag for the marathon (it has a zippered front pocket and mesh back - worked perfect for after the marathon when I showered at the ARC & had a wet towel to transport home).
+ The expo had lots of local merchants, charities, other races, and the official merchandise/other running items you might need from Body N Sole. I grabbed a nice Brooks zip pull-over with the Marathon logo on it and a beer stein.
+ Pasta party Friday night from 4–7pm (all in the same place - ARC for packet pickup, guest speakers, pasta party). Included House Salad, Bread, Choice of Meat Lasagna or Penne Marinara (could request gluten free beforehand), Iced Tea / Lemonade, White Chocolate Bread Pudding or Chocolate Chip Banana Bread. Cost was $16 for adults, $7 for kids. My only issue with this was trying to time out the expo, eating, going back to the hotel, and getting ready for the race/racing. Since we didn't get back to the hotel till after 9, I was glad we had already eaten dinner. I just needed a light snack before bed + my protein shake.
+ You could purchase a day pass for ARC for Saturday for $5. This was awesome. I was not looking forward to driving home 2+ hours to get home while feeling gross from 6+ hours of running. My mom and I both brought our own towels (recommended to bring a lock for a locker) and showered before driving home. Felt way better + made it easy to change into clean clothes.
+Parking for the 5k was easy - no lines to get into the parking lot (we got there around 6:30 or so). Our parking lot had port-a-potties that we utilized before heading to the start.
+ Corrals for the 5k went from A–H I believe. Released every 2 or so minutes.
+ Running on the street meant it was pretty spacious. Though the start was pretty congested, I feel it cleared out pretty quickly.
+ Course was marked clearly and easy to follow.
+ I was a little nervous at first, realizing we'd be running at night and I didn't bring Knuckle Lights or anything, but I didn't have any trouble seeing where I was going. Some parts got a little dark, but not too bad.
+ 1 water stop on course - seemed well stocked with cups and volunteers. I don't remember taking anything.
+ Fun running through the streets of U of I on a Friday evening.
+ Finish on the 50yard line of Memorial Stadium - cool.
+ Awesome medal.
+ Plenty of post-race snacks - bottled water, bananas, Jimmy John's sandwiches, Nature Valley granola bars. Outside on the 4th mile party, you could grab your beer and a slice of birthday cake.

CONS:
- Unisex shirts for the 5k. Unisex often fits so oddly, so I prefer gender specific. I'll give a + for being tech material. I definitely don't need another scratchy cotton shirt.