Write a Review
What did you think of the race? Share your thoughts! Write a Review
Heather recommends this race
2016
"Icy path leads to SLOW race; great SWAG" 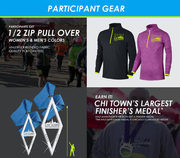 This was my first year running this race. The weather turned out to be less than ideal. The start was 27 degrees with a feels like temp of 16, 15mph winds, and partly cloudy. Much of the course was near the lake, with the wind being almost unbearable. I was very happy to have a Buff to cover most of my face, or I'm sure I would have gotten wind burn or something. The part that wasn't covered (you know, my eyes so I could see haha) hurt so bad. Luckily, the course did get away from the lake for a few miles, which at that point I was thinking it was getting warm and I could take my hat off, but then we got back on the lake and was glad I kept it on. I normally am able to take my gloves off about a mile into a race, but the wind was so bad I kept them on the entire race. Anyway, race weather conditions can't be helped - it is what it is, just thought worth mentioning.

PROS:
+ Option to get packet mailed for $9.99. I chose this option since I didn't think I'd be able to make it into the city/up north on Thursday or Friday. Packet pickup on Thursday, April 7 from 10:00 a.m. - 7:00 p.m.
Friday, April 8 from 10:00 a.m. - 6:00 p.m. at Sports Authority Sporting Goods, 3134 North Clark St., Chicago, IL 60657
+ It was originally scheduled to start on Cannon Drive across from the Peggy Notebaert Nature Museum, and then it changed to Montrose Harbor about a month prior, but they were good about sending out an email and updating the website with the new information.
+ They set up shuttles to bring you to the start line from the old parking locations (Zoo, street parking near the Cannon Drive location)
+ 1/2 pullover - nice quality/design; you had option to choose the women's purple or the black men's
+ Plenty of aid stations - water first then gatorade.
+ Enthusiastic/friendly/supportive volunteers
+ The course was supposed to close at 11:30, but stayed open longer
+ They were breaking down the finish line party around 12:20. We finished later than expected due to waves taking a long time to get through and ice on the path, so was worried about missing out on the pizza and beer. Luckily, we were still able to get both.
+ Unique medal
+ 10k and half marathon distance (I honestly contemplated taking that 10k turnaround when we hit it with how rough the race was going with the ice and wind).
+ I liked that the course was a little different. Not a complete out and back on the LFP
+ Bottled water, Pizza (Connie's deep dish) and beer at the finish line! And it was a Chicago based beer company - Finch's Beer Co. Yay for not the other beer we are so used to haha.
+ Even though we had to park over a mile away (originally thought it would be a great warm up, but then we had to wait 30 minutes before starting anyway), it was free, and there were port-potties lining the parks, easier than waiting in the line at the race

CONS:
- Parking at Montrose was a HUGE pain. I thought we left plenty early, but we ended up getting caught in a long line of traffic to get off LSD onto Montrose exit - was backed up about 1/2 mile and took 30 minutes to get through. Didn't help that people would cut the line.
- We ended up having to park over a mile away from the race. It started at 8:15, and I thought we would miss the start, but there ended up being a 3 wave start, and we had to wait around another half hour before starting. Knowing that there was going to be a wave start would have been helpful. We would have stayed in the car a little longer to stay warm.
- The course was about 75% ice. I know the weather can't be helped, but I thought for sure someone would have gotten the path cleared for the race. I don't know if that should be on the city or the race, but it was very unsafe. We ended up having to do a lot of walking, trying not to fall.
- With the amount of ice on the course, I was surprised at the lack of medical staff on course. I didn't see any falls, somehow, but I imagine there had to be some. I almost fell about 5 times, but managed to stay on my feet. Even some spots that looked clear ended up having some black ice and slid plenty of times.

If you know me, you know I rarely have many cons or have much to complain about with races, but I was really disappointed with the parking situation and the icy path. I thought it was unsafe conditions and was worried about breaking an arm. That being said, generally I felt the race communication was good (only downside there was not mentioning wave start... and really I don't think I would have cared if that wind wasn't so miserable), and I'd definitely give the race another chance next year. Knowing how the parking was this year and if it's at Montrose again, I'd switch up my plans a bit to accommodate parking.