Write a Review
What did you think of the race? Share your thoughts! Write a Review
Linda Juretschke recommends this race
2019
"2019 Chicago Half Marathon I'd Do it Again in a Heartbeat" 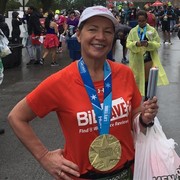 What a fabulous race! I ran this and the Chicago Spring Half Marathon in May, so I earned a special medal for doing both. Communication about the race was excellent leading up to the day. Because of severe storms in Chicago the two days before the race, I opted not do drive the 35+ miles into the city to pick up my packet and instead had my son, who lives just a few miles away from the packet pickup area, pick it up for me. He said it was very crowded but the lines moved fairly quickly, so that's all I can comment about there.

The race started and finished in Jackson Park in the Woodlawn neighborhood on Chicago's south side. If you know the area, it's not great, but everything felt completely save throughout the day. There was an option to take a shuttle or find one's own transportation, but the Metra Chicago Electric line added a special train just for runners that day. That was the option I chose, which I am glad since because of the rain, the shuttles were delayed while a decision was being made about the race.

I drove in during a torrential downpour but by the time I arrived in the city, the rain started to slow. I parked in the Millennium Plaza Garage. As they themselves warned, it was difficult to find the entrance and I was under the bowels of Michigan avenue and the area is very sketchy. I pulled into the wrong garage at first but eventually found my way, hopping onto the train with just 2 minutes to spare. The train announcer was awesome and was encouraging and congratulating the runners along thew 20-minute ride. It really was a nice, encouraging boost.

We departed the train and had to walk about 2-3 city blocks to the start area. I rarely check a bag, but given the weather I wanted to have dry clothes after the race. Gear check was on the far end of the park and it was an absolute mud pit. Luckily I thought to wear flip-flops and didn't put my running shoes on until right the start of the race. Unlike the vast majority of participants, my shoes, socks, and feet were warm and dry at the start of the race.

It rained pretty much the entire race, but the temperatures were in the 60s so it wasn't too bad. I heard thunder in the distance with 5 miles to go, so I really motored to finish before the race might get called.

Gear check pickup at the end of the race was pretty chaotic and the park was even muddier and sloppier than at the start of the race. Luckily I grabbed my gear bag fairly quickly. I was excited that my favorite pizza, Home Run Inn (I grew up walking distance to the original) was being served at the post-race party, but I didn't want to slog through the park to get it so I skipped the pizza and the beer and headed to the tent to pick up my extra half marathon series medal. I spent about 10 minutes talking with the very nice people from the race and then headed to the train station for the ride back to where I parked. I had to wait a little over an hour for the train which was a bit of a drag. Had the weather been nicer, I would have spent that hour at the post-race party.

Overall this was a great race, well organized with a beautiful course along the lakefront that we unfortunately didn't get to enjoy due to the weather. Except for the bit of chaos at gear check after the race (it is very possible some volunteers didn't show up due to the weather), It was a great time and I would definitely do it again. I only gave the Expo Quality 3 stars since I didn't personally attend.