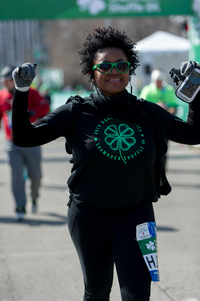 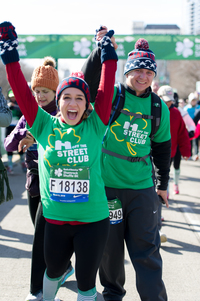 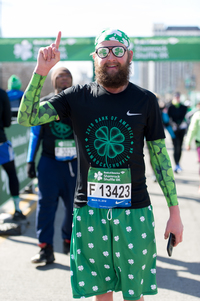 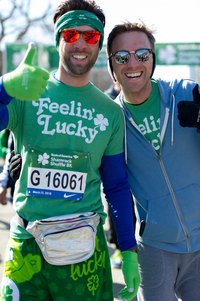 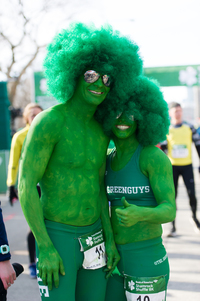 Celebrating 40 years! Get ready to go green and get your Irish on at the 40th annual Bank of America Shamrock Shuffle on Sunday, March 24. Don't miss your chance to participate in a one-of-a-kind celebration through the streets of Chicago.

What did you think of the race? Share your thoughts! Write a Review
Heather recommends this race
2016
"Kick off 'race season'!" 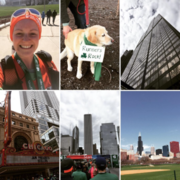 I honestly can't tell you how many years I've been doing the Shamrock Shuffle! I love getting to run through the streets of Chicago - gives you some nice scenery vs so many other races that are on the LFP (which I still enjoy). It's necessary to be on the streets though, with the amount of runners they have out there. This is always a well managed/organized race and I always have a great time. The race was held on Sunday, April 3 with 2 waves of runners/corrals. The weather was a bit chilly and windy, but definitely not bad at all. Race morning ranged from mid 30's to lower 40s (though I know around 7ish it was a feels like temp of 25). As long as you're dressed appropriately, no problem. I personally enjoyed the weather, but I know that can be a touchy subject, as everyone's hot and cold is relative to them and their location.

I saw 'race season', because for most it kicks things off for the year, but if you're like me, all year is race season :)

PROS:
+ Expo was on two days: Friday from 10 am–8 pm and Saturday 9 am–6 pm at McCormick Place, West Building Hall 1
+ Parking at McCormick Place was super easy, and they validated at the expo so it was $10
+ New expo hall this year - F1, which was super close to the parking lot - not the hike it was last year in Hall A I believe
+ TONS of exhibitors - I had a lot of fun looking around at other races, gear, etc. and a lot have expo/discount pricing
+ Nike has a bunch of awesome Shamrock Shuffle gear every year (sold by Fleet Feet)... unfortunately for me, it was no different this year. My wallet took a hit ;)
+ Packet pickup was organized and easy - you have your confirmation email/QR code you show to the person at the bib pickup; you could hop in line where you number we be (say 20,000–25,000), or if someone was free they were happy to help. I accidentally went in the wrong numbered line (thought it was correct but then looked up and realized I should have been over 2 lines, but they didn't seem to mind). Your bib comes in a folder with safety pins. You then went down to the other end to grab your race shirt, organized by Men and Women sizes, and you got a bag with your shirt, Chicago Athlete Magazine, Shamrock Shuffle sunglasses, coupons, and a box of Cold-Eeze.
+ Easy to exchange your shirt. I found the sizing to be a bit smaller than most, so I went up a size. They had sample shirts to try on, and all you had to do was give them your folder with your bib so they could scan it and swap out the shirts. Easy peasy.
+ Gear check opened at 6:30am along with start corrals. Wave 1 start at 8:30am (corrals A–D), Wave 2 at 9am (Corrals E–H)
+ Post race party start at 9am; live music began 9:30. Post-race party ended at 1:30 with an after party at The Scout at 2pm
+ Aid stations were well manned and stocked - gatorade at first set of tables, water at the next. Located mile 1.6 (State Street and Randolph Street) and 3.6 (Harrison Street and Wells Street)
+ Energetic volunteers
+ Course on the streets of Chicago - start at Monroe and Columbus, west on Grand, south on State, west on Jackson, north on Lasalle, west on Randolph, south on Franklin, east on Harrison, south on Michigan, east on Mount Roosevelt, and north on Columbus to the finish line.
+ At Finishers Chute you received your medal, bottle of water, cups of Gatorade, bag of Sun Chips (original or cheddar), bag of pretzels, Special K snack bar, and a banana.
+ With your entry you received a free Michelob Ultra (there was a ticket you tear off your bib). I think you all know how I feel about that beer option, though, so I did not partake.
+ Thomas English Muffins and Bagels - you got a free toasted muffin of bagel. I wasn't hungry before the start, when the line was short, and when I finished it was really long so I passed, but cool option
+ Home Run Inn pizza truck

CONS:
These are just nit picky things, not that they bothered me much, but I know some people want to know ALL the details, so here they are:
- The shirts ran small to size, in my opinion. Even the XL seemed pretty small, which made me wonder how many women had to go with a men's size in order to get one that fits?
- Some of the Chicago streets have some potholes/uneven spots, so you just need to watch where you're going
- I'm slow, so of course was in the last corral, which I'm fine with. Mom and I stood at the back of the fence so that once we started moving, we'd be starting at the back so we wouldn't have people running us over as we did our intervals. Once we started moving though, a TON of runners joined in the back, so corral H was WAY overcrowded. It was maybe the size of 2.5 corrals. Might be a pain, but maybe have an unofficial break between the last corral mid-way through to help break them up. The crowd never really thinned out when running, which seemed unusual to me, as usually it does. Lots of weaving around walkers or slower runners, which didn't bother me a ton, but again, know that it does for others.

I'd definitely recommend this race! It's a standing tradition here in Chicago for most runners.

You can read a more personal recap on my blog: http://www.heatherrunsthirteenpointone.com/2016/04/shamrock-shuffle-2016-recap.html