Write a Review
What did you think of the race? Share your thoughts! Write a Review
Meridith Daniel recommends this race
2019
"Atlantic City Triple Threat!" 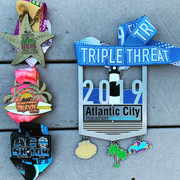 The Atlantic City Marathon Series hosts its fall races in mid-October each year. Saturday is the 5k/10k and Sunday is the half/full marathon.

2013 was the first time I ran the race weekend and I’ve returned each year since for the 5k or 10k.

With 3 races offered throughout the year, they sweetened the deal by adding a Triple Threat medal in 2019. It’s probably clear that Atlantic City Marathon Series is one of my all time favorites ever, so it didn’t take much convincing to go for the Triple Threat!

The fall series offers packet pickup at multiple locations throughout the week prior to the races. Originally I chose to do day-of pickup (for an additional fee of $10) but a friend was able to grab mine earlier in the week and there was no fuss with that, which was much appreciated. Less running around for me the morning of the race!

What I love so much about running in AC is the comfort that comes along with it. These races are a nice size – around 850 runners for both the 5k/10k. With a 9am start time for the shorter races, it's easy to wake up early and drive down the morning of the race.

The race series also provides a coupon for runners which brings the $25 casino parking fee down to $5.

My race was what I expected, given my training runs. I chose to run solo to see what I was capable of and I was happy with the result!

Running on the boardwalk is always fun for me. It was hard to see the 5k runners peel off, knowing that I still had double the distance to go but I love that it's an out and back course so I could cheer on friends. My last mile was tough and I was very pleased to see the finish line, right outside of Bally's Casino.

Once I crossed the line, I received my 10k medal. My bib had a mark on the back for the Triple Threat medal (it might have been easier to spot on the front - other runners had a sticker placed on theirs).

After showing the back of my bib, I received the mother of all medals, the Triple Threat!

After we cheered everyone in across the finish line, my group of friends made our way to the courtyard that held snacks (bagels, water ice, etc.) and drinks. If there's a post-race beer I'll usually have a few sips and Saturday was no exception.

I've already got my eye on the 2020 Triple Threat medal!