Write a Review
What did you think of the race? Share your thoughts! Write a Review
Bradley recommends this race
2018
"Sweet Race - Eating the Hills!" 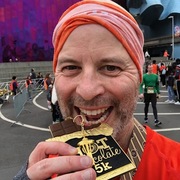 For the full race review, visit my blog:
https://bradleyontherun.com/2018/03/04/allstate-hot-chocolate-15k-seattle/

Social Media: The Hot Chocolate Series is America-wide, so their social is quite broad. However, the Website for the Seattle race was very informative, and I referred back to it frequently.

Packet Pickup: Although the Expo itself wasn’t huge, it had a great vibe and was super-efficient early on Saturday. I liked the QR code option to expedite the process, and there were tonnes of eager volunteers to get things done. And because it was held at Seattle Center – near the start line – I had a preview of where to go the next morning.

T-Shirt/Swag: Probably some of the best swag I’ve ever received at a race – and my favourite part of the Hot Chocolate 15k Seattle! First of all, the quarter zip (blue for guys, purple for girls) is great – nice fit, nice feel. Something I’ll use! And the medal itself is epic – big, bulky bling, just as it should be! And this year, each city had its own keychain attached (Seattle Space Needle for me!)

Course: Be prepared for hills. And a long, long uphill climb. Naturally, you get rewarded with the downhill again…until that uphill in the final kilometre. Some of the views – over Lake Union, and of the city – are quite striking. At the same time, you spend ages on the same, straight (hilly) road, which gets a bit monotonous.

Post-Race: I was done early enough that I got my Finisher’s Mug full of sweet treats pretty quickly. I imagine the lines got more intense a bit later on. It was a great, positive vibe, although we didn’t stick around long. Good fun.

Would I Run It Again? Given the bling and the goods, I’d definitely consider it. But because the course wasn’t my favourite, I might be tempted to try a Hot Chocolate race in another city, and try something new. But never say never – you may see me there again!!