Write a Review
What did you think of the race? Share your thoughts! Write a Review
Mark Davidhizar recommends this race
2018
"Great Course, Great Support, Great Volunteers" 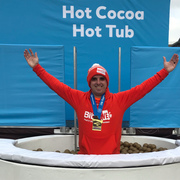 The Columbus Hot Chocolate 15k was held on Sunday, November 18, 2018 in down town Columbus with the start/finish lines in the arena district. Weather was perfect with starting temps in the mid 30s with very little wind.

The expo was open for 2 days, Friday afternoon and all day on Saturday at the down town convention center. Parking was easy to find across the street and only cost $1 for each half an hour you were parked.
This was a smaller race expo than what you would find at major races. But it was easy to get your bib and race jacket. There were several vendors present, but seemed to only be a couple that were running related. There is an option to get your race packet mailed to you for a fee. For me, it might be worth paying the fee next year so I don’t use as much gas on the weekend.
As always, there were some chocolate treats for those at the expo to try. Call it an early sample of what you will receive following the race.

At the expo, participants picked up their race jacket. Every year, on social media, people get the opportunity to vote on the color jackets that runners want to see in the coming races. This years was black for men and a dark purple for women. Each year runners get a jacket, but the style changes. One year it was a thick/heavy hoodie, last year it was thick but no hood. This year it was a lighter weight hoodie. I appreciate the different style from year to year. The race also offered all participants free race photos which were up on the website later integrated afternoon.
Race Day

The Hot Chocolate Races have a 15k and 5k option. Both races start at 7:30 and run together for the first mile before splitting. This was a different course than what I ran in 2016.

There is Gear check located right by the starting line. I did not use it this year because I was actually parked close to the finish line. I had a heat sheet with me, so I left all my warm clothes in the car for me to put on quickly following the race.
Prior to the start of the race, a recipient of Make A Wish spoke about her experience with the organization. The race donates proceeds to Make a Wish. This was followed by the national anthem and then the start.

The course was covered very well by volunteers and police. There were officers at every intersection on the course. I made sure to thank every single one of them that I passed. They seemed very appreciative and even gave me words of encouragement in return.

The course had some rolling hills early but nothing too bad. It was a great course with running through some nice neighborhoods and around some of the towns parks and through downtown .

The course had 4 aid stations with water, Nuun, and Chocolate items. All the aid stations were very well maned with volunteers eager to help or to encourage runners.

The finish was just outside of the downtown hockey arena. It was a nice down hill for the last quarter mile or so.

Following the finish, those who did the 15k were given a bottle of water and their finishers medal. Each medal is city specific. The Columbus medal and a picture of the city skyline.

After the race you are able to go get your post race food. Of course it was hot chocolate and fondue. The post race party had a DJ playing music and plenty of photo ops. A couple of them had race volunteers ready to take your phone to take photos for you.

Overall, Columbus is my favorite Hot Chocolate race that I have run. It’s smaller than Chicago and I feel like they do a great job keeping runners safe and the volunteers were awesome. I would definitely recommend this race to anyone.