Write a Review
What did you think of the race? Share your thoughts! Write a Review
Preston Ramsey recommends this race
2017
"ZIPPING through Akron!" 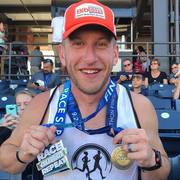 First and foremost, this race - nay, this race SERIES - is incredibly well organized. I can not express how amazing the organizers were at communicating information, updating their web presence, ensuring that the race series app was ready to go - the list goes on and on. It seemed like every little thing you could think of was thought of and planned for.

The expo for the marathon was a streamlined event for sure. Runners collected their bibs and "swag bag" in the first of two large convention halls, before moving on to take the obligatory photo with their bib & the race backdrop. After this, participants moved on to the vendor side of the expo. SO MANY VENDORS! Great showing from a TON of upcoming races, local universities, non-profit organizations, and so on. Near the end of the serpentine path that wound through the expo was where runners collected their official race gear, which included a 1/4 zip finisher pullover and lightweight running hat for the marathoners. Just being honest, I've worn my pullover every chance I had since race day!

Three words: KARA - FREAKIN' - GOUCHER. I had the opportunity to meet and chat with one of my favorite runners of all time. She's incredibly humble and does so much for the sport. Hands down, one of the absolute highlights of the weekend!

RACE DAY:
Parking - There's a fair amount of parking, set up by which event you are running (full, half, or relay). My wife and I drove past the first marathon-specific garage (a block from my corral) and had no problem accessing the next one, only two blocks from the start line. Easy in, easy out.

Start Line Area - Unlike the two prior events in the race series, the Akron Marathon holds to a strict corral system. This ensures that runners start where their ability level dictates! Minus some minor bottlenecking getting INTO the corrals, moving around the start area was very easy. Lots of music and (thankfully) an abundance of porta-potties! Race started on time without incident and we headed out!

The course itself is thriving with spectators at all points, offering boundless encouragement, cheers, smiles, and hi-fives! However, the course is also a challenging one, with varying elevation changes throughout - especially in the second half. There are definitely more significant hills on this course than what I am used to in the relative flatness that is the Columbus, OH metro area. This fact alone had me quite nervous about how this marathon was going to pan out!

Thankfully, coming around a corner at just before mile 24, I realized that the 16-weeks of training had put me in unfamiliar territory - coming VERY close to cracking 4 hours. Ultimately, I finished in 4:06 - setting a nearly 40 minute PR. I think it's safe to say I was ZIPPING (nod to the Univ. of Akron there) through Akron!

THE FINISH. First off, you finish the race on the home field of the Akron Rubber Ducks - a minor league affiliate of the Cleveland Indians - which is pretty darn awesome. Great crowd to cheer you in as well! Then, snag up your medal and head over to the post-race party - or Finisher's Festival - which was AWESOME. Live music on stage, beer, pizza & other food all out on the outfield. Can't ask for too much more than that. On your way OFF the field, you can snag your SERIES FINISHER medal (and medal hanger) if you've completed all three events (1-National Interstate 8k & 1 Mile, 2-Goodyear Half Marathon & 10K, 3-Akron Marathon, Half Marathon, & Team Relay).

Walking away from the finish with my wife, I was racking my brain to identify anything I could critique about this race - and I couldn't! Almost two weeks removed from the race, I still can't. If you're looking for a well-organized, friendly, and challenging event - come check out the Akron Marathon. I truly believe that you will NOT be disappointed. Thank you, Akron Marathon, for a great event and an even better race series!